Oʻahu is home to some of Hawaiʻi’s largest and most extensive museums and collections featuring art, artifacts and heirlooms from Hawaiʻi and the Pacific.

Bishop Museum
Hawaiʻi's museum of natural and cultural history, the Bishop Museum was originally designed to house the extensive collection of Hawaiian artifacts and royal family heirlooms of Princess Bernice Pauahi Bishop. The Museum has since expanded to include millions of artifacts, documents and photos about Hawaiʻi and other Pacific cultures. Daily programs allow visitors to discover more about Hawaiian and Polynesian cultures through live, interactive presentations and exhibit tours.

Hawaiʻi State Art Museum (HISAM)
Located in Downtown Honolulu across the street from the ʻIolani Palace and State Capitol, the Hawaiʻi State Art Museum Hawaiʻi (HISAM) is dedicated to exhibiting and interpreting the art and culture of Hawaiʻi. Through Enriched by Diversity, a semi-permanent installation reflecting Hawaiʻi's rich ethnic and cultural traditions, as well as a dynamic changing exhibition program, the museum honors and inspires artistic excellence and promotes educational enrichment. Located in the historic No. 1 Capitol District Building, a Spanish-Mission style structure built in 1928, the museum is comprised of three spacious galleries, an outdoor tiled lānai, a 70-seat multi-purpose room and a volunteer resource center: Hawaiʻi.gov/" target="_blank">www.Hawaiʻi.gov/sfca

Honolulu Museum of Art – Spalding House
Visit Oʻahu's Honolulu Museum of Art – Spalding House (formerly known as the Contemporary Museum) for a stimulating look at the Museum's outstanding art collection and a light lunch at its gourmet cafe. The dramatic Mount Tantalus serves as the backdrop for the Museum's artist gardens and outdoor exhibits of contemporary art.

ʻIolani Palace
Located in Downtown Honolulu and one of Hawaiʻi’s most historic places, ʻIolani Palace is the only official state residence of royalty on U.S. soil. Journey through the times of happiness and tragedy of King Kalākaua and Queen Liliʻuokalani as you view their two-story American Florentine style palace.

Hawaiian Mission Houses Historic Site and Archives
Nearby ʻIolani Palace, take an escorted historical walking tour into the life and work of the Protestant missionaries who settled in Hawaiʻi in 1820. Hawaiian Mission Houses Historic Site and Archives displays three original frame homes that were built in New England and shipped to Hawaiʻi to house the missionaries. Nearby you'll see the island's original schoolhouse and the printing house where the first alphabet book and Hawaiian hymnal were printed.

Hānaiakamalama
Located on the drive to the Nuʻuanu Pali Lookout, visit the secluded summer retreat of Queen Emma, King Kamehameha IV and their son, Prince Albert. Following the tragic death of the 4-year old prince in 1862 and the king in 1863, Hawaiʻi's Queen lived a life of mourning at the Palace. Inside the Hānaiakamalama you can find royal antiques and furnishings stand in their original places, including the koa wood cradle of Prince Albert and gifts from his Godmother, Queen Victoria.

Hawaiʻi Plantation Village
Located in Central Oʻahu, escape the present day and explore Oʻahu's plantation heritage and culture at the Hawaiʻi Plantation Village in Waipahu. You'll learn how more than 400,000 immigrants who arrived between 1852 and 1947 to work on Oʻahu's plantations actually shaped Hawaiʻi into the vibrant multiethnic community it is today. Explore a sugar plantation village and botanical garden featuring historic homes and plants reflecting the cultural diversity of the islands.

Pearl Harbor
Named for the pearl oysters once harvested there, Pearl Harbor, located in the ʻEwa District of Central Oʻahu, is the largest natural harbor in Hawaiʻi and the only naval base in the United States to be designated a National Historical Landmark. Explore the living museums of one of Oʻahu’s most well known landmarks at the Pacific Historic Parks, the USS Arizona Memoria, the Battleship Missouri Memorial, the USS Bowfin Submarine Museum & Park, the Pacific Aviation Museum and the USS Oklahoma Memorial.

Stroll through an impressive collection of art that ranges from Impressionist masters to Japanese woodblocks and works by Hawaiian artists.

Explore millions of artifacts, documents and photos about Hawaiʻi and other Polynesian cultures, all housed inside one of Honolulu's most historic buildings.

Five historic sites, including the USS Arizona Memorial and Pacific Aviation Museum, help visitors gain an intimate understanding of the events that plunged the U.S. into World War II.

END_OF_DOCUMENT_TOKEN_TO_BE_REPLACED 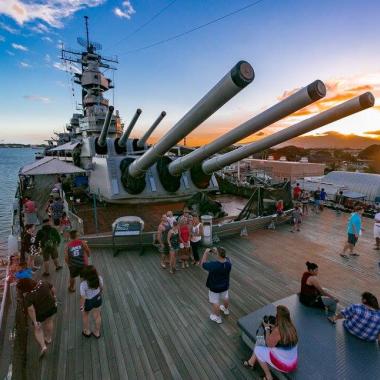 The Battleship Missouri is located on legendary Battleship Row in the famous Pearl Harbor, Hawaii. [...]

END_OF_DOCUMENT_TOKEN_TO_BE_REPLACED
Go to Oʻahu Things to Do Page
Next Video